Yin JinKang will celebrate with the headmaster. 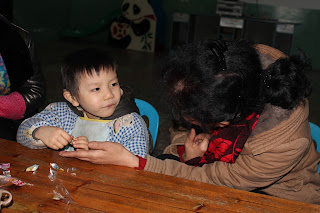 Yin JinKang尹金康(5) is from Huaihua (怀化) in south-west Hunan Province, China. He has attended the Changsha deaf centre for two years, where he also lives. For breakfast, he likes best to eat baozi, which is a type of donut or dumpling filled with meat. Otherwise he likes very much to eat apples and all foods with lots of chilli. His favourite subject is art.
In the evenings, he likes to watch TV. On his day off school, Sunday, he likes to walk in the park with the volunteers from the university who likes to hang out with Yin JinKang and other boarding students. Yin JinKang says that he loves going to school. He likes it even more than being at home!

When I asked him what he wanted to be when he grows up, he said that he wants to be a doctor because his mother is suffering from cancer and his father being old and disabled cannot take care of him. He hopes he can cure his mother's illness, so his mother can take care of him and he will not be sent to the orphanage.

Yin JinKang does not have any family who can take care of him except his mum. His mum would not like JinKang to end up in one of the many orphanages. So, she is one of the parents who have asked the headmaster of the school, Mrs. Wang, if she can personally take care of her son after she dies.

Posted by Penguins at 23:34 No comments: