From scepticism to joy! Peng Yueling ( 30) and her husband , He Qiwan ( 35 ), who live in Hunan province in China looked forward to getting biogas on the farm. However, they were a bit anxious about the fact that inexperienced strangers from Madagascar would be doing the job of building the biogas tank.

Why?
NMS have been running successful biogas projects in China for Many years. Through the “International Biogas project”, we are seeking to transfer this biogas success to our partner Church in Madagascar by training technicians and farmers in Madagascar and building biogas digesters in both Madagascar and China. As a part of their training, five technicians from Madagascar came to China for 7 weeks to study biogas technology in our project area in YongShun in Hunan Province. As a part of their training, these technicians helped built the biogas digesters of farmers in China who were not able to build their digester on their own, like Peng Yueling and He Qiwan. 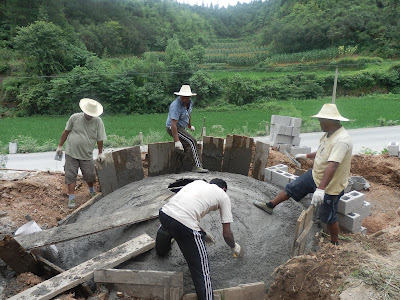 Scepticism
Not surprisingly, this family of four was very interested in getting a biogas digester as it would make their lives much easier. Mr He Qiwan works in Guangzhou City and is away from the farm most of the year. As their two children are quite young and they have no relatives who can lend a hand, they accepted the offer of help from the Malagasy biogas apprentices.


However, their scepticism actually increased when Peng Yueling met the technicians for the first time - they were smiling and friendly. From my cultural perspective I interpreted this to mean that they were not serious and would not do a good job, she admits. However, she relatively quickly changed her mind: - I soon discovered that they worked very hard and were talented. We are very pleased with the biogas tank we built together, she says.

Results
Peng Yueling did not only get a biogas tank. She also got new friends. Tears rolled down her face as the technicians finished the job and returned to Madagascar - We became good friends, even though we do not have any common language or will be able to see each other again, says Peng Yueling. She is delighted that she can now make food in a smoke free kitchen and can cook easily and conveniently.

Her husband is also happy. The biogas tank ensures that the family save money on energy. The organic fertilizer is used on their fields where they cultivate corn, cabbage, carrots and potatoes. The result is a better environment, better health and a little more money to spend on school fees and other necessities.

How Does Biogas work?
Waste from the human toilet, the animal pen and any kitchen waste all goes into the tank under the farm. The air-tight tank transforms the biomass waste into methane. Thus, renewable energy is made. This gas is odourless and produces no smoke, and can be used for cooking and lighting. When the "mixture" has produced the gas, the sludge and slurry that comes out of the tank is now organic fertilizer of high quality. So, the biogas digester does not only provide gas for cooking and lighting, but also good organic fertilizer for the field. 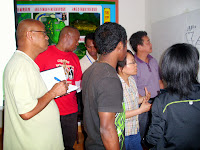 Great Impact Over the past five years, NMS has enabled more than 1,000 families in YongShun in Hunan to get biogas digesters on their farms. Now we want to help to provide biogas for even more families in YongShun in China. As a part of this project, we are also transferring the success of the biogas projects in China to our partner in Madagascar. Do you want to make this possible?

Do you want to help?
For about one hundred pounds, you can provide a biogas tank for one of the neighbours of Peng Yueling & He Qiwan. By supporting this project, you help fight poverty, protect the environment and improve women's health.  Peng Yueling & He Qiwancan enjoy a biogas tank that can last 20-30 years. Would you like biogas valuable for more people? Click here to find out how you can support this project.